Home / Blog / She May Look Different, But The Story Is Still The Same

Barbie has undergone a makeover. In the past 50+ years, Barbie has had 150 careers, 50 nationalities, 40 pets, countless luxury vehicles, and thousands of makeovers, but none compare to this.

The original Barbie—with her tiny waist, stick thin legs, and petite frame—has been heavily criticized for promoting an unhealthy image. Researchers at Finland’s University Center Hospital even pointed out that with a 36-inch chest and 18-inch waist, Barbie would not have the 17% body fat needed to menstruate!

Barbie is meant to represent a woman’s right to choose her own destiny. The philosophy behind Barbie is a girl can be anything she wants to be. And with 28 different versions, more and more girls can find a Barbie that represents themselves. One Nigerian girl has even created Hijarbie—Barbie modeling ‘mini hijab fashion’. 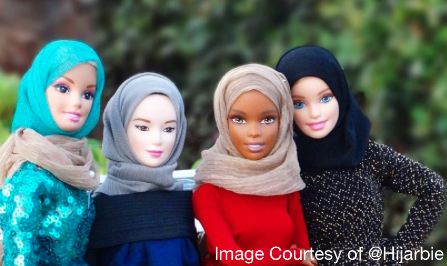 If you think Barbie’s diversification is cause for celebration, then you are missing the elephant in the room. Barbie holds a secret message, found in her high fashion clothing, flawlessly make-up, and perfectly styled hair: Girls can be anything they want to be as long as they adhere to feminine stereotypes.

An image is worth a thousand words, and Barbie’s appearance perpetuates stereotypical ideas of femininity. This has not been mitigated by the ambitious careers Barbie has held over the years—doctor, scientist, or computer engineer. Researchers at Oregon State University and the University of California have concluded that girls who play with Barbie are far less ambitions, and see far fewer career opportunities open to them, than girls who played with Ms. Potato Head. The results were the same regardless of whether the girl was playing with Doctor Barbie or Fashion Barbie.

Simply put, something about Barbie screams stereotypical ideas of what it means to be a woman. Barbie prompts girls to think about body and fashion, not skills and aspirations. And with 28 new models, this stereotype is going to resonate with 28x more girls.