By Carissima Mathen and Jane Bailey

In 2011, Ryan Jarvis, a London Ontario high school teacher, used a pen camera to surreptitiously record brief videos of students engaged in various activities around the school without their permission.  After reports from another teacher, the school principal personally witnessed Jarvis recording two female students, and demanded that he turn over the camera.  Police analysis of the device revealed 17 active videos, 2 videos which had been deleted but subsequently recovered and other videos that were not recoverable.  Of the 30 individuals depicted in the videos, 27 were female students; five of the images focused specifically on their breasts.  Some days later, police searched Jarvis’ home and found that most of the files on a hard drive located in Jarvis’ room had been placed there after the pen camera was seized.

Jarvis was charged with one count of voyeurism under s. 162(1) of the Criminal Code.  A trial was conducted on the basis of an agreed statement of facts, with no live witnesses.  In November 2015, despite describing Jarvis’ behaviour as “morally repugnant and professionally objectionable”, the trial judge, Goodman J., acquitted him.   The acquittal has attracted strong criticism from one of the young women who was recorded, as well as from the London Sexual Assault Centre and Western University’s Centre of Research and Education on Violence Against Women and Children.

R. v. Jarvis joins a long list of cases that raise serious questions about the ability of the criminal law to meaningfully address sexual offences against women. To be sure, we were heartened by the trial judge’s carefully reasoned conclusion that the privacy rights of the students targeted had been violated despite the fact that the photographs were taken in a public place. Goodman J. correctly recognized the fundamental difference between moving through a public space like a school (regardless of whether the school employs stationary surveillance cameras) and being singled out for surreptitious recordings by a trusted authority figure.  Nonetheless, he interpreted the voyeurism offence unduly narrowly.  Furthermore, even if his legal interpretation was correct, his treatment of the evidence was very concerning.

What is the crime of voyeurism about?

Section 162(1) defines voyeurism as secretly observing or recording someone in circumstances that give rise to a reasonable expectation of privacy where (a) the person is in a place (such as her home) where she might reasonably be nude, have exposed genitals, or be engaged in sex; (b) the person is actually in one of those three states; or (c) the observation or recording is done “for a sexual purpose.”

Because the secret recordings in this case were of clothed young women engaged in school activities, the Crown had to prove that the recordings were made “for a sexual purpose.”  Goodman J. was not convinced of this beyond a reasonable doubt.

In analysing that conclusion it is essential, first, to note the gravamen of the voyeurism offence – what it is intended to punish, and the values that it protects.  In our view, voyeurism protects both personal privacy and a person’s right to control the exposure and use of their bodies by others.  Section 162 is, thus, an important safeguard for sexual integrity, and a way to punish wrongful objectification.

Problems with the judge’s analysis

Turning next to the interpretative issue, it is important to understand the term “for a sexual purpose” and, in particular, “purpose”.  In criminal law, “purpose” can describe more than one state of mind. It can either describe a person’s bare intention to do something, or her ulterior reason for doing it. Most criminal laws require proof only of bare intention, and “purpose” is understood in this sense (“I did it on purpose”).   Less frequently, the term may require proof of the accused’s ulterior reason (“I did the act to achieve a particular purpose”).  This latter understanding is sometimes called “specific intent”.  (Aside from mental states, “purpose” can also denote a characteristic of something.  One could, for example, use the words “for a purpose dangerous to the public” to describe an explosive device.)

The trial judge quite properly considered other offences that use the term “for a sexual purpose”, in particular, sexual interference, invitation to sexual touching, and child pornography.  But his treatment of them was inadequate.

First, Goodman J. accepted defence counsel’s argument that voyeurism is analogous to the offences of sexual interference with, or sexual exploitation of, a young person.  Because those offences have been held to require proof of specific intent, he found, specific intent should also be required before convicting someone of voyeurism under section 162 (1) (c).

Goodman J.’s analysis failed to properly consider two points.  First, sexual interference and sexual exploitation are types of assault. Specifically, they target wrongful sexual touching between adults and young persons.  In order to avoid catching otherwise innocent contact between an adult and young person, the offences require proof of a particular, sexual mindset. In contrast, in order to convict someone of voyeurism, the Crown must first prove that the accused’s behaviour was both surreptitious and an invasion of a reasonable expectation of privacy.  Thus, even without proof of a specific sexual purpose, the accused’s actions are difficult to characterize as innocent or benign.   In our view, this lessens the need to interpret the words “for a sexual purpose” in the crime of voyeurism in the same way.

Second, the trial judge failed to properly consider child pornography.  Though he did mention the offence, Goodman J. did not appreciate its utility in interpreting voyeurism.  This was unfortunate, because child pornography appears to be far more closely aligned with voyeurism than either sexual interference or exploitation of young persons.  Like voyeurism, child pornography is concerned with a type of wrongful exploitation, and, like voyeurism, it is not dependent upon physical contact between the accused and the victim.  The structure of child pornography is also similar to voyeurism in that it contains multiple definitions of the proscribed materials.  In particular, for audio-visual pornography, the law includes materials that depict (a) a young person engaged in explicit sexual activity or (b) the genital organs or anal area of a young person as a dominant characteristic and for a sexual purpose. 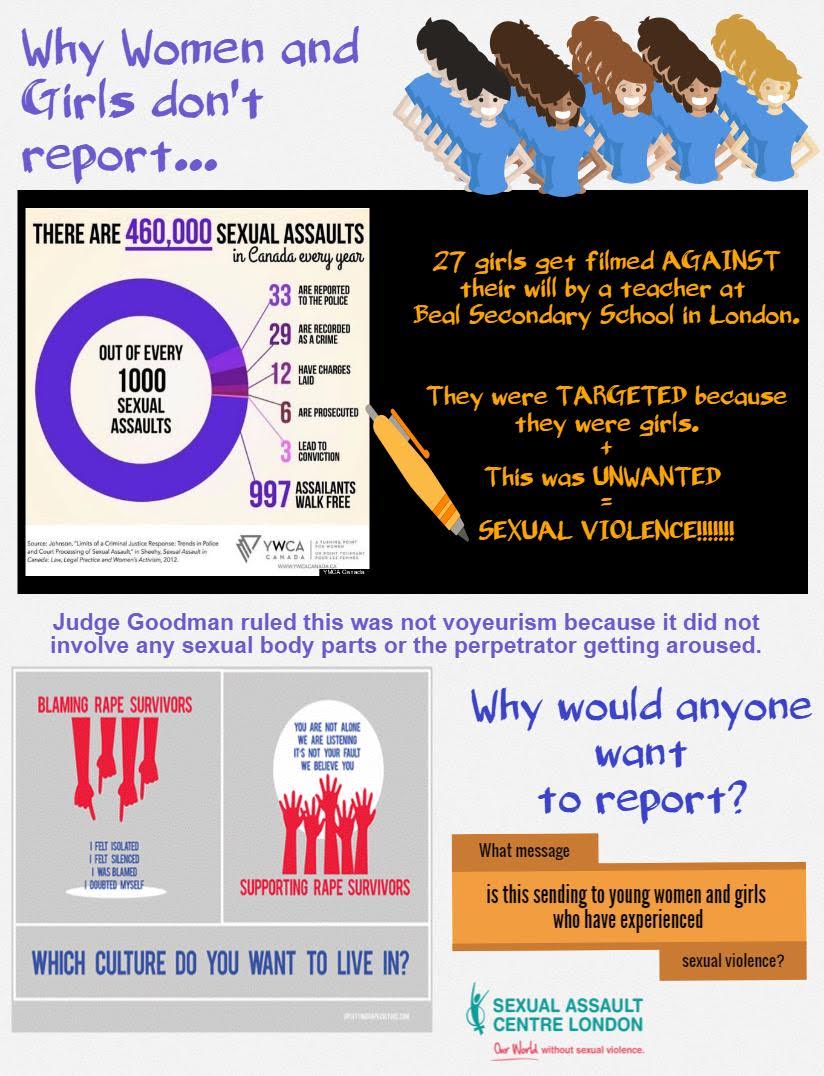 In the first decision interpreting the offence of child pornography, R. v. Sharpe, the Supreme Court of Canada did not find the words “for a sexual purpose” to require proof of specific intent. Rather, it treated the words as a characteristic of the materials.  “For a sexual purpose”, the Court said, should be interpreted as “reasonably perceived as intended to cause sexual stimulation to some viewers.”  The Court thought this both necessary, and sufficient, to prevent the law from catching otherwise innocent depictions, such as family photos of children in a bath.

Goodman J. cited the Sharpe decision, but not its clear implication that the words “for a sexual purpose” did not require proof of specific intent.  While he appeared to accept that one can determine sexual purpose from the surrounding context, he ultimately focussed on whether Jarvis himself had had a specific, sexual intent when he made the recordings.  Because Jarvis did not testify, the trial judge said, inferences had to be drawn from circumstantial rather than direct evidence.

In concluding that the words “for a sexual purpose” require proof of specific intent, then, the judge interpreted voyeurism too narrowly. It is true that voyeurism uses the term “the recording is done for a sexual purpose” which could imply that the words refer to an accompanying state of mind.  But we think this is inconsistent with the underlying objective of the offence.   Certainly, section 162(1)(c) requires that the circumstances have a sexual context, and this can be satisfied by proof of a specific sexual mindset.  But, as with the offence of child pornography, a recording or observation should be eligible to be characterized as “sexual” without such proof. (Otherwise, it seems that many voyeurism prosecutions will fail so long as the accused declines to testify.)  A better interpretation of the “sexual purpose” element in voyeurism would look to the overall context to determine whether, in an objective sense, the activity entailed the sexual objectification of the victim.

Goodman J.’s conclusion is extremely problematic. Most of the surreptitiously-taken photographs focused on young women students, and several of the photographs fixated specifically on their breasts.  In such circumstances we find it mystifying to suggest, let alone form a reasonable doubt, that the accused might have had a non-sexual purpose in making those recordings.  The Crown properly bears the heavy burden of proving each element of the offence beyond a reasonable doubt.  It does not bear the impossible burden of disproving fanciful theories that rely on speculation about the inner workings of the accused’s mind.  “Proof beyond a reasonable doubt” does not extend that far.

Jarvis is a highly problematic decision. At a time of increasing recognition of how cyber-violence undermines the equality rights of women and girls, the case is a strong candidate for correction and clarification by a higher court.  Without such correction and clarification, decisions like this simply reaffirm the viewpoint that criminal law has no capacity to play a role in a broader strategy to end sexual violence against women and girls.  Accepting that viewpoint lets law and legal institutions off the hook far too easily.  Women and girls have a right to expect more.