Want to participate in your own #DisconnectionChallenge? Follow the link here for our #DC Lesson Plans!

In 2017, eQ’s Valerie Steeves was approached by a group of eight Kingston teens working with Brock University’s Valerie Michaelson who were interested in exploring how their media use affected their sense of connection to themselves, others, and nature. The group designed a Youth Participatory Action Research (YPAR) project in order to both explore the impact of their own media use, and to challenge other young people to do the same. The project was formed around a two-week period: the first week would require them to keep a media diary of their online activities; and the second week involved a one-week media fast: avoiding social media platforms, Internet browsing (except for schoolwork), texting (save for their parents), and listening to music with headphones.

They discovered that their social media use had blurred the lines between their public self-presentations and their private lives and relationships. They also discovered that taking a break from social media gave them a chance to spend more time with friends and family, get their home work done well in advance, ‘think deep thoughts’, and spend more time outside. After the fast, they chose to cut back on some disclosure practices (such as feeding Snapchat streaks) and were much more deliberate and thoughtful about the information they shared online.

Excited by what they had learned, they wanted to share their experiences with other young people across Canada. Steeves and Michaelson worked with them to create a three-minute video entitled #DisconnectionChallenge detailing their experiences, and the surprising results of their week-long media fast.  Numerous media outlets, including: CBC Radio Ottawa Morning, CBC News Ottawa, Global News, Kingston Whig, Queen’s Gazette, and The Toronto Star covered the launch in August 2017, and interviewed Steeves, Michaelson, and all eight teen members of the group.

In February of 2020, The eQuality Project partnered with The Alberta Teachers’ Association to coordinate the world’s largest #DisconnectChallenge to date, involving over 11,000 students across Alberta, along with their teachers and families. With support from their families and teachers, students followed the same structure as the 2017 #DisconnectionChallenge, and after the media fast, students were encouraged to share what they learned through text, video, or artistic productions. Plans are underway for the #DisconnectChallenge to return in a further expanded format in 2021 across Western Canada.

The teenagers who instigated the original #DisconnectionChallenge of 2017 have also undertaken the design of a second YPAR project entitled the #ConnectionChallenge in the wake of the COVID-19 pandemic. The original group have coordinated with The eQuality Project’s Valerie Steeves and Brock University’s Valerie Michaelson to investigate the challenges of maintaining meaningful connections with friends and family via solely digital means after the closure of schools, universities, and workplaces in Canada. In addition, this new project will investigate the smaller kinds of human connection that are often undervalued or overlooked, such as simply being in a public space. Data from the #ConnectionChallenge will be published in 2021. 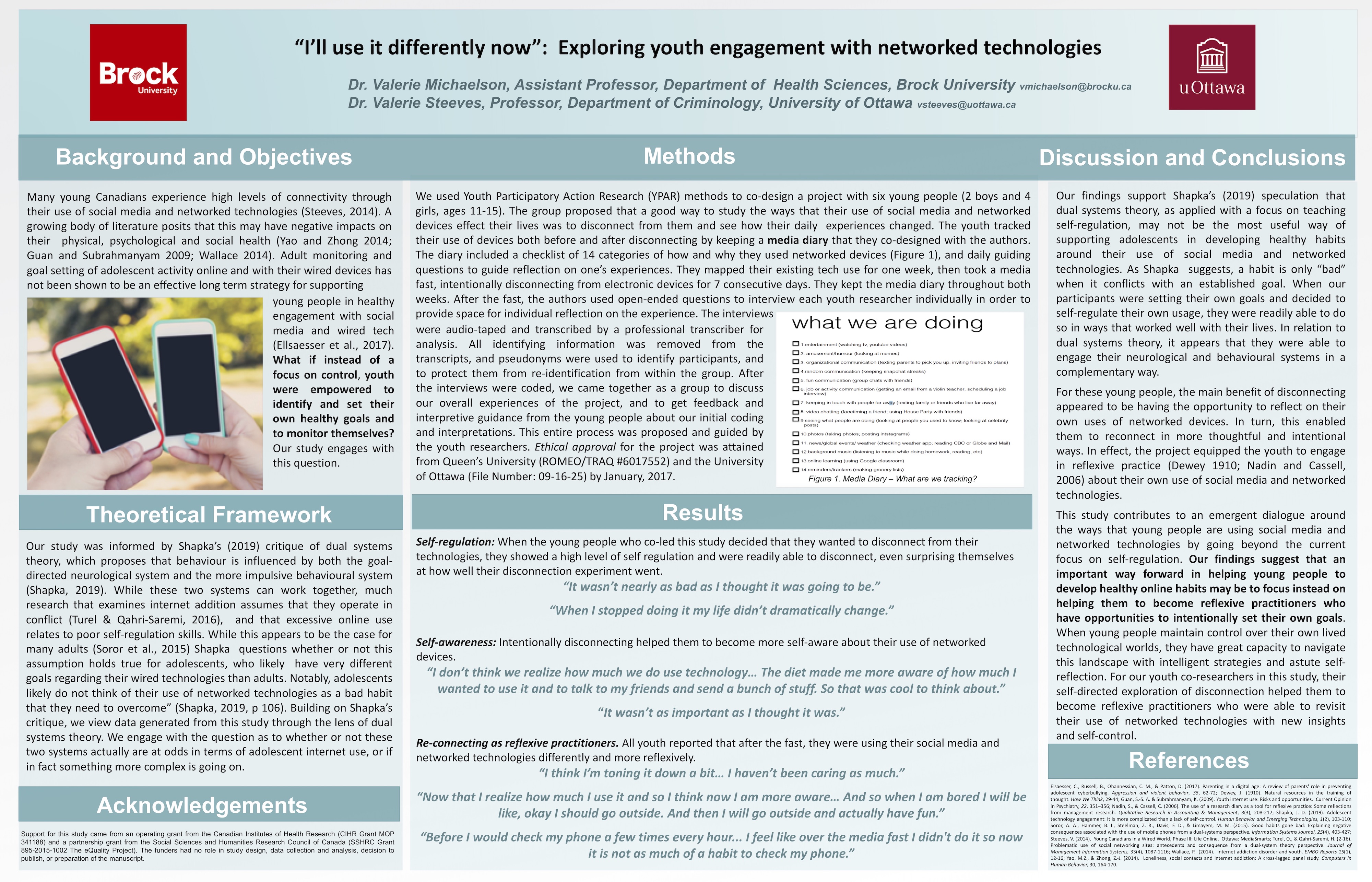